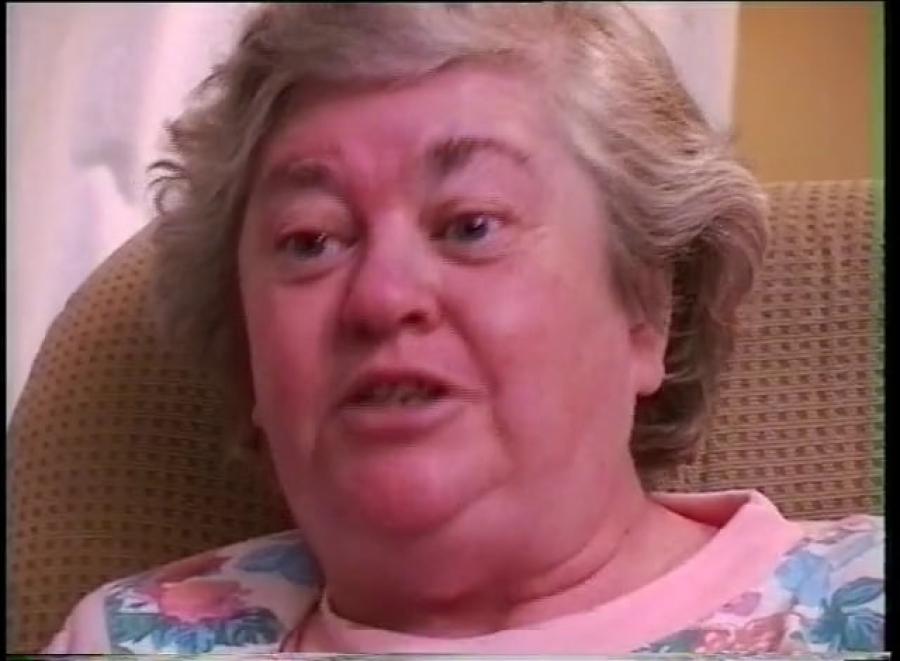 Judy was born in 1935 and her family lived in Cathedral Street, where there were seven hotels. Before that the family lived in rooms, and once they did a flit for lack of rent money. Judy’s home was of four rooms; the ‘throne room’ was in the backyard: “there were cockroaches in it, and … if you didn’t flush it beforehand they’d come up and tickle you”. The roofs of houses were so close that she could climb out a window, and walk across the roofs to visit friends who lived in another street. Aged two, Judy was looked after by the Woolloomooloo free kindergarten, where Pixie O’Harris painted the fairy mural. Children were malnourished and were given little bottles of milk and sometimes oranges, because a lot of children had rickets. Judy loved The Domain, and the bay. The water was so clear near Mrs Macquarie’s chair, that she could catch leather jackets with a pin, a piece of bread and string.  The Sunday school organized holidays at Stewart House, Curl Curl, and at Cronulla; picnics were held at Chinaman’s Beach, where they collected long shells ‘like Chinamen’s fingernails’. The Phillip Park Library and Craft was the best place in the holidays and after school. Judy was there from age 4 to 16, learnt many skills and met Edith Murray of the Puppetry Guild. Just as well as ‘there were problems with men trying to pick you up in cars from quite an early age, from about five’. TOn cracker night, firemen would arrive to put out the street bonfires, and boys would chop through the hoses with tomahawks. In the adjacent street, prostitutes with red hair and red fingernails sat on their verandahs. Palmer Street was notorious and most of Judy’s friends grew up to be prostitutes. Tilly Divine, a big women with long black hair, was well-liked and often gave children a ‘shiny shilling’. Bea Miles was another character, but her habitat was Bebarfalds Corner in the city.